I have the pleasure of posting a Guest Post of an Outdoor Oven build from DFW, a good friend of mine and a fellow MDR member.

Outdoor Oven
by DFW
Like MDR, we want to build an outdoor kitchen. However, with both of us working full-time and taking care of two houses, we just aren’t ready to commit to the whole thing yet. We have an area that we know where it will eventually be but the parameters aren’t quite defined.

We know what we want in it (sink, grill, stove/oven & possibly a fry area). I had been researching a lot of things on the internet and ran across a plan for an outdoor wood burning oven/stove/grill and was intrigued. I clicked the link and hurrah! I found what I thought would work great, on the Mother Earth News website. Printed the whole article along with the diagrams & pictures and brought them home to the husband. http://www.motherearthnews.com/Do-It-Yourself/Build-An-All-In-One-Outdoor-Oven-Stove-Grill-And-Smoker.aspx

Instead of saying - “Oh no, not another project for me.” He loved the idea and wanted to go ahead and build it now, because doing so in the future may not be possible. We decided to go ahead and spend the money to get it put in place now.
Of course, after studying the plans he wanted to make some adjustments, typical him. Basically it was a fire brick oven with a removable steel top & door, set as high as you need and then surrounded by concrete block with space in between fire box & outside walls, for insulation (which will consist of a concrete & perlite mix).

Well, the husband thought that building a steel box and then lining that with fire brick would make things easier. He ordered the sheets of steel and had one of his employees, who is a genius with welding, make the box. We had old firebrick that we were going to use but after further research found that the old brick might have been made with asbestos and thought better of using for food stuff. He found a local company that makes and sells fire bricks so he broke down & purchased enough to do the job. 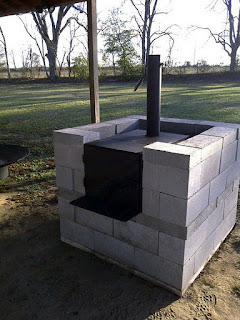 He started building and adjusting as the month wore on. Then, the box was finished, we decided to go ahead and move it to our 2nd location, which will eventually be where we retire.
We still couldn’t decide on a permanent spot so we decided on a temporary one and put it in. Lit it and lo and behold it worked!

In order to test it for real, we decided to make New Year’s cornbread in it. Fired it up and got the cast iron skillet ready.
It was getting late in the day and the chops, greens, black eyed peas were moving along so we decided to go ahead and bake the bread. Figured it could ‘set’ for awhile, while everything else was finishing up. Put the skillet in to ‘heat’ up. Mixed the batter and took it out to the oven. Took the heated skillet out of the oven and let it cool for a few. Put the batter in and boy did it sizzle! Put it back in the oven and continued to watch carefully. 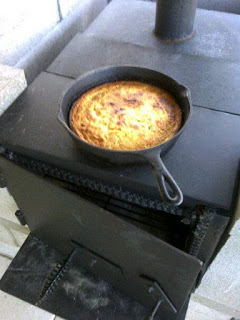 Original recipe called for baking 30-45 min. It wasn’t ready after 45 so let it go a little longer, just under an hour. The cornbread finally set up. Once we took it out, we realized we didn’t let the skillet cool enough when we initially put the batter in, so the outside was kinda brown, well it was actually burnt. That didn’t stop us though because it smelled so good, we ate the inside; it was very similar to spoon bread and very tasty.

So overall, very happy with the results. I think we’ll try pizza this weekend!

Here’s a full photo of the semi-finished product:


Materials
1      ¼”  sheet steel (4x8)
53   Fire Brick
3     Welders chipping hammers (cut heads off to use as handles)
15’  ¾” High temp stove gasket
1         High temp gasket cement
2         High temp paint
1         Porcelain coated booking grid
Stove top pipe – depends on how high you need to make it. We used 3 ft for the temporary location.
Hinges. Husband made his own from bushings and bolts.
Various concrete blocks – depends on how wide and how tall you are going to make it. We used 39 full blocks, 20 solid blocks.
Pavers – totally optional. We put nine in front just to keep dust down.
Will eventually need secrete to insulate – see directions in link below.
Paint, gaskets & glue purchased online – cjshomedecor.com
Chipping hammers from Northern Tool (cut heads off)
May need extra brick for insulation on top of stove box.
Stove Gasket is woven fiberglass – purchase extra as it has a tendency to be hard to stick. Maybe not using enough glue?
We spent around $325, more than we intended. But if you were going to insulate right away you could use lesser thick steel or none at all. And, we thought we could use the leftover fire brick we have stowed but couldn’t verify that it didn’t have asbestos, so decided to go the safe route. Not using the steel and new brick would decrease the cost by about $220. If you already have enough blocks laying around, the savings is even greater.
We felt that since we didn’t have a permanent spot yet, we needed an actual box for the oven itself. Still haven’t put insulation between box and concrete block but it’s pretty good at keeping temp, unless it’s really windy. We really should have put it on the east side of that building, the wind is a bear on the west side in the winter time. Maybe it will be just the opposite in the summer time.
All directions, except for making the actual steel oven box, are here:
http://www.motherearthnews.com/Do-It-Yourself/Build-An-All-In-One-Outdoor-Oven-Stove-Grill-And-Smoker.aspx
It takes a bit longer to heat up than we originally thought but we just light a small fire, open the flue a bit and check on it occasionally. About an hour later and we add wood or not, depending on what we are going to cook and how high a temp we need.
Will eventually add a thermostat to the front door but it works well enough for novelty cooking right now.
Posted by Modern Day Redneck at 6:17 PM