Sunday At The Stove

I told you at the beginning of the week I wanted to break down the events of last weekend so I would have something to write about.
Being I work till dark everyday and can't get much done in the evenings besides shower, shave and eat, I have been lacking on posts. I think I made up for it this week though.

After all the little things I did on Saturday like the Bio Sand Filter and the Sawdust Log Press plus some other odds and ends, I found myself without much to do on Sunday.
The first thing I did was install a men's urinal in my shop.
Yes, that is a funnel going out the wall held on by bailing wire.


Next, my mom calls me and tells me the local grocery has potatoes on sell for 19 cents a pound. Being I did not have that great of a potato harvest this year I jumped on the chance to put some up. So I ran up to the store and got 55 pounds of taters.

I began by pealing every one of them by hand. Great for the compost bins, hard on the hands.


Okay, I picked up this 1960s slicer at a garage sell for a buck. Now, I am around heavy equipment all day that can kill you and in my shop I operate all kinds of saws that can dismember and hurt you. This little thing right here is the most dangerous thing I have ever operated. All I could think of is my fingers being taken off a quarter inch at a time.

Enough of all that so I went and grabbed my meat slicer and went to town on those potatoes.

After blanching the slices and soaking them in lemon water for a few minutes I put them on the dehydrator. 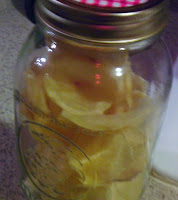 The finished product is several jars nicely filled with a serving of potatoes I can use in all kinds of dishes.
I think the shelf life for these is four years.


I also shredded some and vacuum sealed them up for hash browns.

No, that wasn't all the taters, I dehydrated twenty pounds, kept ten pounds to eat, made ten pounds of potato salad, and shredded fifteen pounds for hash browns.
I can tell you this, my feet were tired when it was all done.