I often talk about my bucket list. At 46 most people say I am too young to have one, but I do. I guess the main reason is because I can pick and choose what I want to do while I am still able to to it. I don't want to be at an age where I say, "I would love to, but I am too old to".
Saying all that I was blessed with an amazing opportunity to mark another one off the old list.

Utah Elk Hunt
Even though it was on the bucket list, I never thought in a million years I would ever be able to afford or get the opportunity to experience the trip. Over the years I have had friends and co-workers go on an elk hunt and I sat in complete envy while they told the stories and showed off the pictures. I have shook my head at the expenses they told me about and the ease of a High Fenced, canned hunt that I personally do not believe in. I have also been told stories of the real deal where they go out and stalk, hunt and harvest the big game either on horse back, walking or canoe. Some of which is scary and way more work than I really wanted to take on.
A few months ago a buddy at work came to me and asked if I wanted to go on a hunt in Utah. Of course I said yes, but was filled with a thousand questions.

As the days clicked by and with much anticipation and prepping, last week finally came. I have never been in that part of the world and did not know really what to expect. I can post all kinds of pictures and try to describe the scenery, but I nor the pictures could not do it justice. I will sum it up with just one word, amazing.
The biggest butt kicking was the altitude at 8000 feet. The end result was a 2 year old 3x4 and about 200 pounds of meat in the freezer. 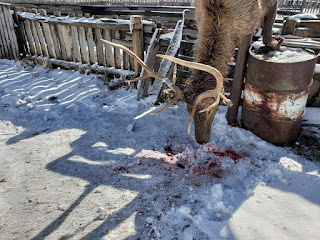 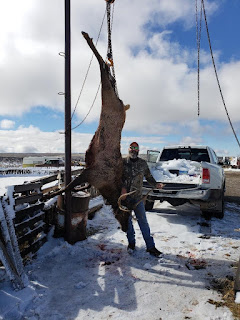 I have never been a head hunter. I have always only killed what I can eat. I do not believe in killing for sport and I always thank the animal for it's life and the provisions it will give me and my family.
Don't get me wrong, I am not a bleeding heart tree huger, but I do respect life no matter what it is, except snakes.

Until next time,
Jerry
Posted by Modern Day Redneck at 7:45 AM 11 comments: